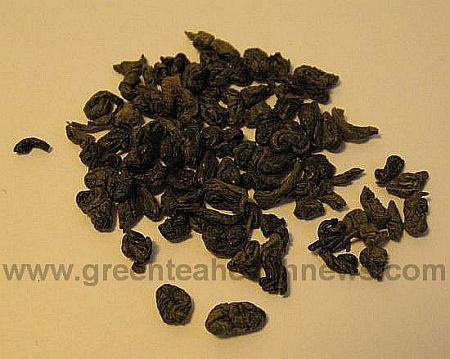 The highest quality gunpowder teas have a naturally sweet and soothingly mellow taste.

In the better grades, the pungency is balanced and smooth, rather than harsh.

These brewed teas may occasionally have a hint of smoky notes, and there is usually a light lemon aftertaste.

This is a great choice for breakfast and as a "coffee break."

It is recommended as a substitute for people trying to reduce their coffee intake, as the taste appeals to coffee lovers.

Each silvery green leaf is tightly rolled into a tiny ball during processing, a technique perfected over centuries to preserve freshness.

The highest grades do not unravel in storage.

Once in the cup, the pellets open up into large olive green leaves.

Gunpowder tea liquor can be darker than some oolongs.

It can vary from a light amber to a strong coppery color with a light green tint to a brighter green olive shade.

When to serve it

Since gunpowder green tea is definitely a daily beverage, it is particularly useful when you need to conquer a long list of "Things To Do."

It provides both the mental and muscular stimulation needed to help you organize, and then take effective action to get the job done.

Think of choosing this tea when you're having a day like this Major in the movie A Bridge Too Far:

Major: "I've got lunatics laughing at me from the woods. My original plan has been scuppered now that the jeeps haven't arrived. My communications are completely broken down.

Do you really believe any of that can be helped by a cup of tea?"

Gunpowder green tea is one of the few green teas that easily goes with red meats. It works with hamburgers, pizza, and BBQ beef and pork.

Try it with chicken and fish dishes that use stronger spices like garlic, basil, and mustard.

When flavored with mint, usually called Moroccan Mint, it helps cleanse the palate during a richly spiced meal.

Flavored with mint or lemon, it is a very refreshing iced tea.

And of course, as a "coffee break," it helps balance high fat or sugar pastries.

How to prepare it

Because of the tightly rolled shape, this Chinese green tea is more concentrated.

Use just 1/2 teaspoon per cup and water just before the boil, about 180F. Steep around 4 minutes.

It was originally named Pearl or Zucha, and has been known since the Tang Dynasty (618-907 AD), famous for their sculptures of horses.

Horse and Groom,...
Buy This at Allposters.com

The current English name is attributed to a British clerk in the 1800's who thought that the processed leaves resembled pelleted gunpowder used for cannons.

It was one of the first Chinese teas to be exported in the early 1600's. By the 1700's it was extremely popular in Europe and the Colonies (now U.S.A), and was marketed under the names Green Pearl Bohea and Hyson.

Constitution Day...
Buy This at Allposters.com


It was probably the Hyson tea that kept Thomas Jefferson, John Adams, and George Washington focused on their cause of American independence and the common good.

Jefferson was known to go through over 20 pounds of the highest quality Hyson annually.

By 1860, almost two-thirds of tea imported in the U.S., was Gunpowder green tea.

The name Bohea was discontinued and the name Hyson eventually was used only for varieties with a long, twisted leaf rather than the pearl shape.

How do they make gunpowder green tea?

Originally, all tealeaf rolling was done by hand.

Now, both plucking and rolling is done by machine to increase production, with the exception of the highest grades that are still hand-rolled.

The tight shape gives these teas the best shelf-life of any tea, green or black.

How is it graded?

Pingshui Temple of Heaven is considered the highest grade.

Since it is produced in a variety of areas now, the tealeaf can vary. Look for dried green tealeaf that is tightly rolled, consistent in silvery green to olive green color, and shiny rather than scorched.

The liquor should be a bright clear copper to olive color, not yellow or cloudy. The aroma should last and the taste remain mellow, not harsh.

Where is this tea grown?

Ceylon and Taiwan/Formosa are also producing their own gunpowder green teas.

Other names include pearl and zucha.

Sign up here for free subscription to the Green Tea Health Newsletter here:

Did you like this page on gunpowder green tea? Here is more about gourmet selections

This page was last updated by Sharon Jones.